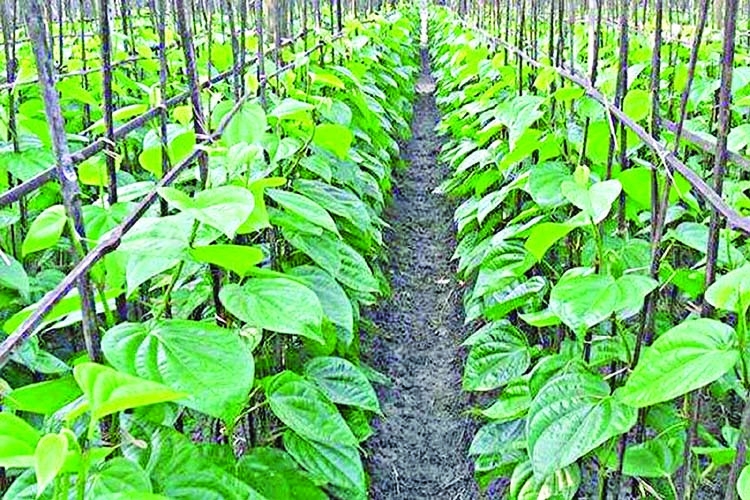 A Betal leaf garden at Maheshkhali in Cox's Bazar. -AA
Betel leaf cultivation is increasing day by day at Maheshkhali in Cox's Bazar including its vast Barind tract as it requires less cost for cultivation and irrigation compared to many other crops. The farmers are showing more interest in betel leaf cultivation since they got its lucrative market price in the last couple of years.
Logicality of the program Betel leaf is an exportable crop which can bring foreign currencies. Betel leaf has been being consumed throughout the subcontinent as a longstanding tradition.
Betel leaves are served to guests at the end of all programs. It is a part and parcel of hospitality in our country. Various types of betel leaves are produced in different parts of Cox's bazar. Betel leaves from Maheshkhali, Cox's Bazar are most tasty.
Betel leaves from Rajshahi are bigger in size. Betel leaves are produced in some other districts  includingBarishal, Patuakhali, Jhenaidaha, Kushtia, Chuadanga and Chittagong. Extension of safe betel leaf production technology can make betel leaf farming more effective and profitable through the use of sophisticated technology.
Ten thousand hectares of land were used for producing betel leaves and 47 metric tons of betel leaves were grown in Bangladesh during 1971-1972. According to information from Department of Agricultural Extension (DAE), 2 lakh 14 metric tons of betel leaves were produced in the country during 2017-2018 on 55 thousand Acre of land in 286 upazilas.
Bangladesh's betel leaves are exported to many countries. However, the export of betel leaves to Europe is currently facing problems due to the presence of salmonella bacteria in the betel leaves of Bangladesh.
The Indian government provides a huge magnitude of economic and technological support to betel leaf farmers to boost this sector. Strong initiatives need to be taken to facilitate the use of latest technologies in betel leaf farming.
It is common to see vendors selling betel leaves near tong er dokan (tea stalls). Sometimes, restaurants and community centres offer a particularly tempting batch of betel leaves decorated with different colourful ingredients for one to select.
There is no fixed rate for betel leaf, the rate is set according to the leaf's origin. Some betel leaves are ruined in the transportation process. Thus, the wholesalers cannot set a fixed price for this product.
There was a drop in the number of wholesalers in 2017 when many were evicted from their business premises as the terminal was remodelled according to the government's instructions. Almost a third of the wholesale shops were forced out then and the evicted ones are now scattered through the streets of Bazar."
Betel leaf has a higher distribution during the non-production season and we also sell Moheskhali's betel leaf during April or May."
Paan is incomplete without supari (areca nut) - it is the cookie to one's milk, the cheese to one's macaroni. Most of the retailers cannot afford to pay upfront for the product. The retailers are people surviving on a daily-basis income."
Paan Arot works on a commission basis with the farmers - reducing its risks of storing betel leaves. "We retain 10 percent of the selling price and give the rest of the money to the farmer. This helps us to assure convenient sales and face fewer losses," said Rasel Hussain.
He said the expenses keep increasing every day but the price of betel leaves is not increasing accordingly. "The rent hikes every year, there is no regulation to this. I have to pay Tk1,800 daily for my 100 sqft shop. When we first rented this shop, our daily rent was Tk700 and within 3 years, it spiked 2.5 times." The association is only responsible for maintaining daily labourers and settling their wages on behalf of businesses.
There are some who have a number of exporters among their clients. proprietor of  Paan Traders said, "We have daily sales of Tk6-8 lakh per day. However, the export market of betel leaf witnessed a downward trend when the European Union banned Bangladeshi betel leaf imports in 2014.
The ban has been extended over the years and is ongoing. Regardless of the ban, the Export Promotion Bureau's statistics on export goods states that in the fiscal year 2014-15, betel leaf worth $22,475,863.23 was exported from Bangladesh.
In the following fiscal year, the amount became $40,828,001.19. Fiscal year 2016-17 witnessed a massive downfall, decreasing exports of betel leaf to $14,619,418.14. In the following fiscal year, the amount slightly increased to $15,035,020.90. In fiscal year 2018-19, betel leaf worth $37,585,691.32 was exported from Bangladesh.
"There are great opportunities in this sector that can easily bring in about $100 million. Given the demand we have today, if we are able to meet it, we can easily earn $60 million just from betel leaf exports," said Md Monjurul Islam, advisor of Bangladesh Fruits, Vegetables and Allied Products Exporters Association (BFVAPEA). The European Union halted the import of betel leaf to its countries because they discovered Salmonella in betel leaves," said Monjurul.
Since then, the Ministry of Agriculture and BFVAPEA have jointly worked with researchers to find ways to combat Salmonella. "We trained farmers, exporters, and almost everyone who works in the betel leaf sector, educating them about the Salmonella bacteria - making sure that they have enough capabilities and knowledge about the bacteria and how to spare betel plants from it," he added.
Upon successful implementation of quality standards at the primary level, both the Ministry of Agriculture and BFVAPEA have been able to assure the cultivation of Salmonella-free betel leaves. "Last month, during a video conference, we assured the European Union that we can start exporting Salmonella-free betel leaves. Currently, we are awaiting their feedback. For now, paan is being exported to the Middle East," said Monjurul Islam.