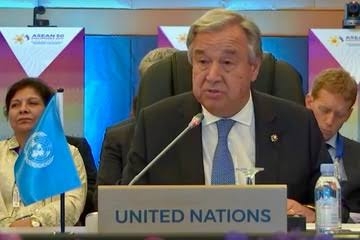 UN Secretary-General Antonio Guterres on Thursday called on the world to strengthen multilateral cooperation, saying a global approach has been the key to addressing the COVID-19 pandemic.Speaking on the eve of the 75th anniversary of the United Nations Charter, he said the world is in turmoil, struggling with the coronavirus and climate change, as well as widespread racial injustice and increasing inequality — all best solved by a renewed sense of multilateralism.“We cannot go back to the way it was and simply recreate the systems that have aggravated the crisis,” he told reporters.“We absolutely must come together to reimagine and reinvent the world we share.“We need an effective multilateralism that can function as an instrument of global governance where it is needed.”Guterres said the United Nations proved its worth in reacting to coronavirus, shipping 250 million items of personal protective equipment to more than 130 countries, supporting children’s education and the needs of families and caregivers.The UN supply chain was also important in moving medical goods around the globe as COVID-19 spread, Guterres said.And its support for developing a vaccine, and his own effort in March to bring about ceasefires in various conflict zones to slow the virus’s spread, underscore the value of the 75-year-old institution’s multilateral approach, he said.The UN charter was signed in San Francisco on June 26, 1945 at the end of World War II and entered into effect four months later.Among people in many countries, the response to the pandemic has eroded their confidence in political establishments and institutions, Guterres saidThe pandemic has bared “severe and systemic inequalities,” and world leaders need to acknowledge the value of global cooperation to address these and other, unpredictable crises, he said.“As we mark Charter Day and look ahead, we must reimagine the way nations cooperate.”“We need to build back better with more sustainable, inclusive, gender-equal societies and economies.”Priorities indicated by the COVID-19 pandemic, he said, are ensuring universal access to healthcare, tightening bonds between people and nations, and rethinking the global economy to reduce inequality.Guterres said he hoped that the five permanent members of the UN Security Council — the United States, China, Russia, France and Britain — would be able to meet in September to smooth over conflicts.“Nothing replaces personal contact, personal diplomacy… that can generate empathy, consensus, common feeling to work together,” Guterres said.