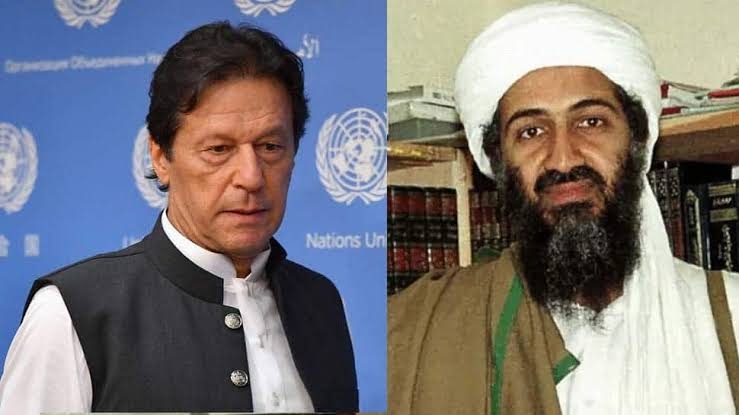 Minister Imran Khan on Thursday called terrorist and 9/11 mastermind Osama bin Laden a martyr in the National Assembly.While addressing the National Assembly, he said, "There was an event in the past that was a matter of shame for us when Americans came to Abbottabad and killed and martyred Osama bin Laden."A video clip, posted by journalist Naila Inayat on Twitter, showed how the PTI leader lashed out at the United States for how Laden had been killed in Abbottabad. Khan said, "shaheed kar diya". After Khan's remark, PML-N leader Khawaja Asif slammed him, according to Pakistan media Dawn. "Imran Khan called Osama bin Laden shaheed. bin Laden brought terrorism to our lands, he was a terrorist through and through and he [premier] calls him shaheed?" Dawn quoted Asif.According to Dawn, Pakistan Peoples Party (PPP) spokesperson Mustafa Nawaz Khokhar in a statement called Khan a "national security threat". "By labelling Osama bin Laden a martyr, Imran Khan has become a national security threat. If he is a martyr, then what is the status of those civilians and members of our armed forces who embraced martyrdom in the attacks by Al Qaeda? Thousands of civilians and youth were martyred in attacks by Al Qaeda," Dawn quoted him.Khokhar also questioned the lesson the prime minister was trying to teach the younger generation, reported Dawn. "Today Imran Khan has proven himself to be 'Taliban Khan' in parliament. The Imran Khan-Taliban nexus was evident from the meetings between the two. This is the same person who had called for the Taliban to open their offices in Pakistan," Dawn quoted Khokhar.Osama bin Laden was the head of the global terror group Al Qaeda and was killed in a military operation by US Navy Seals in 2011 at the garrison town Abbottabad. He was accused of engineering a number of terror attacks worldwide, particularly targeting the American installations including the 9/11 incident of 2001 when close to 3,000 people lost their lives when five planes were hijacked to target American cities.This is, however, not the first time that Imran Khan has showed a soft corner for bin Laden, according to news agency ANI. In September 2019, during his US tour, Khan said Pakistan had informed the American security agencies about the presence of Osama bin Laden in Abbottabad, said ANI. But he stated that the US should not have undertaken a "covert" operation to kill bin Laden keeping Pakistan completely in the dark.