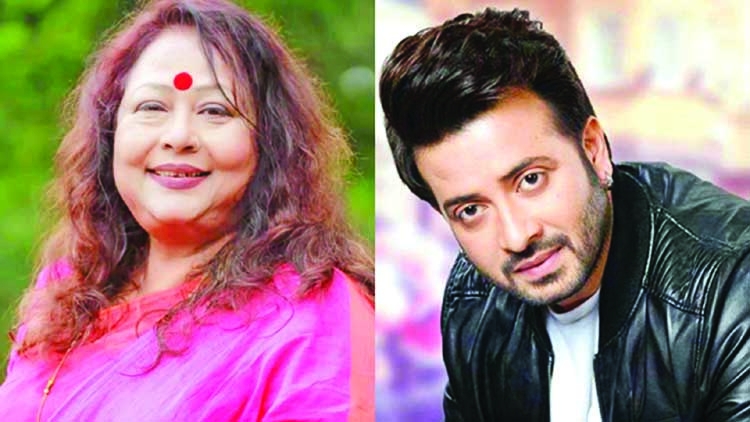 Legendary singer Dilruba Khan has filed a complaint under the Digital Security Act against Shakib Khan for using songs in films without permission.Part of the song 'Pagol Mon' has been used in the film 'Password' starring Shakib Khan. This song is sung by veteran singer Dilruba Khan.
The song was made by songwriter Ahmed Kaiser and composer Ashraf Udas. The people involved in the song have lodged a complaint about the matter. Complaints have also been lodged against private mobile operator Robi.
The complaint was filed under the Digital Security Act in the Cyber Crime Unit. Barrister Olora Afrin filed the complaint on behalf of the song's creators. Regarding the song, vocalist Dilruba Khan said, "Shakib Khan used the song 'Pagol Mon' in his film 'Password' without permission. And it has been used commercially. Mobile operator Robi has done the same.
I am the singer of the song, the lyricist is Kaiser Ahmed, and composer is Ashraf Udas. Since we are artists, our families run on our songs. We frist tried to sit down with them since and come to an understanding since they gained commercial benefit but we couldn't come to an accord that is why we have to look to the law."
Olora Afrin, Dilruba  Khan's lawyer and barrister in the Bangladesh Copyright Office, said, "If a song is used commercially, you have to give it the right it deserves.
The most popular song of the nineties is 'Pagol Mon'. This song is used by Shakib Khan in his film. The song has been viewed almost 20 million times. We gave legal notice to Shakib Khan last February for using it commercially without permission.  I also talked to Shakib Khan about this. He wanted to come to an accord. But later no agreement was reached due to the amount of money."
She added that the song was also used commercially by mobile operator Robi who did not inform Shakib or his organization which is why we have also accused Robi. Note that the 'Password' has been in controversy since its release.
It turns out that the film was created by copying the Korean movie 'The Target', directed by South Korean producer Chang, released in 2014. The story and scenery of 'Password' match this film. The Korean film can be found by searching on YouTube. The film 'Password' was released on Eid-ul-Fitr 2019 directed by MalekAfsari.
'Password' is co-produced by Shakib Khan and Mohammad Iqbal. The film is based on the screenplay of Abdullah ZahirBabu.Shakib Khan, Bubli, MishaSaudagar, AmitHasan and others have acted in it. The film has been released in 177 cinemas across the country. This is the second film produced by Shakib Khan.