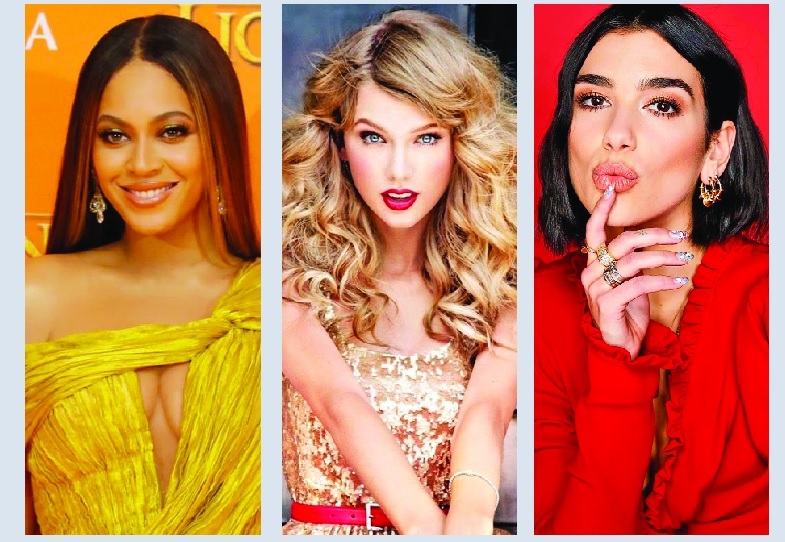 Beyonce Taylor Swift Dua Lipa
Pop queen Beyonce on Tuesday led the Grammys pack with nine nominations, as music prepares to celebrate its hitmakers in a year that saw the coronavirus crisis deal devastating blows to the industry. Coming in second with six nods were Dua Lipa - who dropped a danceable album of club hits just as venues began closing in March - and pop shapeshifter Taylor Swift, whose folk-tinged surprise pandemic album appeared to bring her back into the Recording Academy's good graces.
Rapper Roddy Ricch - who won a trophy last year for his collaboration with the late artist Nipsey Hussle - also received six chances at Grammy gold, including for Song of the Year, which honors songwriting, for his hit "The Box."
Beyonce's sweeping "Black Parade" - released in June amid explosive nationwide anti-racism protests after another spate of police killings of Black Americans - will vie for Record and Song of the Year honors on January 31. "Put your fists up in the air, show Black love," sings Beyonce - the Grammy's most nominated female artist ever with 79 - on the track.
The 39-year-old megastar boasts 24 Grammy wins to her name - but notoriously lost Album of the Year in 2017 to British balladeer Adele, a controversial snub often cited as an example of the Academy's diversity issues.
Swift, a former Grammy darling whose work the Academy pushed aside in recent years, bagged a coveted Album of the Year nomination for "Folklore." Its single "Cardigan" is up for Song of the Year.
In addition to Beyonce and Ricch, rivals in that category include last year's big winner Billie Eilish and warbling rapper Post Malone.
Bluesy rock singer and songwriter Brittany Howard - known for her leading vocals with the band Alabama Shakes - jumped into the spotlight on her own with five nominations after releasing her first solo album "Jaime."
--- AFP