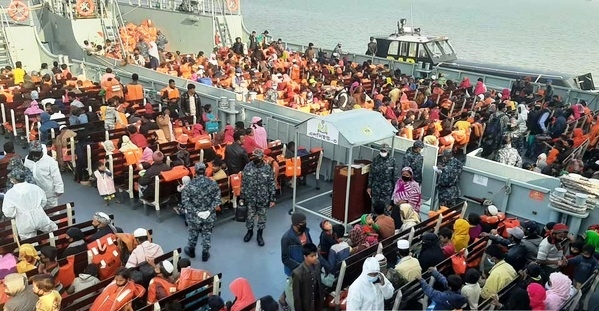 Naval ships carrying a second batch of 1,804 Rohingya refugees are on their way to the island of Bhasan Char from Cox's Bazar's Ukhiya.
Six vessels set sail from a jetty adjacent to the naval boat club in Chattogram at 9:15 am on Tuesday. They were scheduled to reach the island by noon.
The number of refugees heading to the remote island in the second phase of relocation has ‘exceeded expectations’, Rear Admiral Md Mozammel Haque, commander of Chattogram Naval Area, told reporters.
"Initially, about 1,200 Rohingyas were expected to leave, but now 1,804 are going to Bhasan Char.”
Two years ago, the government made plans to relocate a portion of the 1.1 million forcibly-displaced Rohingya people living in and outside the refugee camps along Bangladesh's south coast to Bhasan Char, situated in the Meghna River's estuary near Hatia.
On Dec 4, the first group of over 1,600 refugees moved to the island on Dec 4, where families are living in separate rooms with cooking facilities, electricity and sewerage systems, along with playgrounds, storm shelters, and livelihood opportunities.
In all, the project comprises 120 cluster villages with 1,440 rooms and 120 shelter stations. Each room has separate toilets and bathrooms for men and women as well as a kitchen. Each cluster village consists of 12 houses, each with 16 rooms. Each room can accommodate four people.
"Necessary preparations have been completed by the district police after being informed about the arrival of Rohingyas," Noakhali SP Md Alamgir Hossain told bdnews24.com.
Earlier, senior police officials inspected Bhasan Char and handed out necessary instructions, Alamgir said.