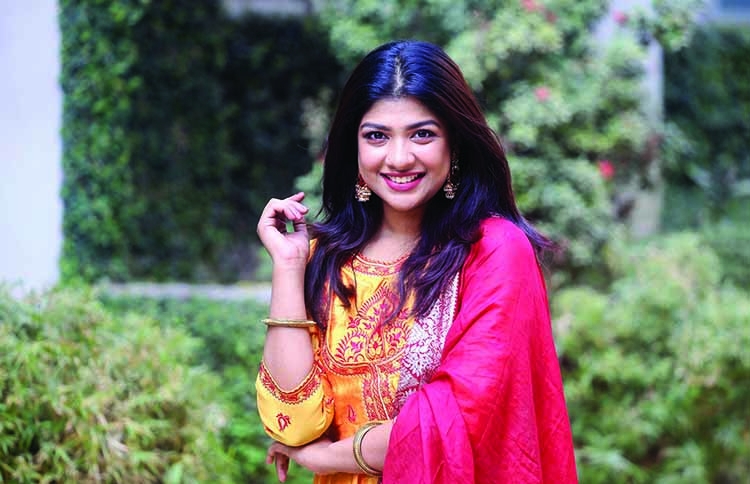 Popular actress of present generation  is Sarika Sabah. She is now known to all as Jhumur among the viewers. Her first acted serial is Mostafa Kamal Raz directed viewers' choice serial Family Crisis. She came into discussion to play the role of Jhumur in the serial.
At the end of 2020, she started shooting of Mostafa Kamal Raz directed another serial titled 'Hit'. Sarika Sabah is acting in role of Bithi in the serial. Besides Sarika Sabah, Monira Mithu, Mukit Zakaria, Marzuk Russell, Ishtaiq Rumel, Mithila, among others are also acting in different roles in the serial. According to the actress, on the first day of 2021, first episode of new serial 'Hit' telecasted on Banglavision at on YouTube channel, Cinemawala. The serial will be telecasted every Friday and Saturday in these two channels.
While talking about acting in the serial Hit Sarika Sabah said, "At first, I wish all for the New Year 2021. Then, I give thanks to Mostafa Kamal Raz Bhai to give me the scope to act in the serial. After working in Raz Bhai's serial Family Crisis, I got many offers to work in other serials. But I didn't work because I believe if I would work under his direction, I will surely get comfort zone for acting.
Other directors may not give me that scope. From that point of view, I agreed to act in the serial Hit. I am acting in role of Jhumur in the serial. But I will miss the role Jhumur because in January, shooting of the serial Family Crisis will end. I will miss Runa Apu, Shabnam Faria Apu of the serial."
Sarika Sabah also said that after completing her graduation, acting is her now profession. For this reason, she has concentrated herself to acting. Last year she got offer to act in movie for several times. Due to obligation from her family, she did not agree to work in big screen.