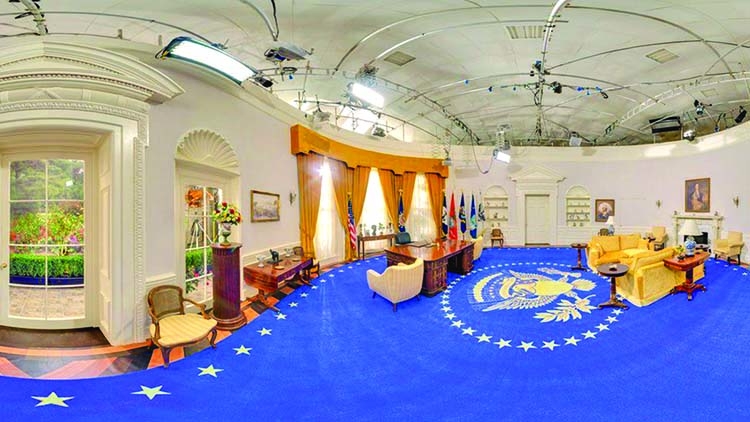 A former RAF base that is home to a replica of the Oval Office has become the focal point for TV shows telling the story of American politics. Part of the White House has been copied at Coltishall Airfield, in Norfolk - 3,700 miles (5,950km) from Washington, reports BBC.It was built for the 2018 film Watergate and is now regularly seen in films, dramas and also news reports. "
We're often used to produce content for US TV, set in the US," said Steve Murphy, of October Films. The Oval Office set measures 4,500 sq ft (418 sq m) and was built with painstaking detail to match the real thing, in Washington DC. It is said to be the only permanent full-sized replica of the Oval Office outside of the United States.
Murphy, head of studios, said filming in Norfolk "can be as cost-effective" as doing it in the States."The area offers so much space for sets and stunts and there's a lot of local expertise nearby. "There's also beautiful woodland, lakes and coastline, and we have access to off-site locations that can double for US homes and buildings."
The studio, near Norwich, has a huge library of American-themed costumes and props, and has been used by major broadcasters and filmmakers around the world.Designer Joe Barcham said: "There was a long research project to get it right, starting with a ton of pictures and some dimensions.
"For example, we got a photo of Barack Obama standing by a door and, as we knew his height, we could work out the doors were 2.5m (8ft)." He is particularly proud of the fireplace, made of wood. "The painter created an incredible marble effect. It's so realistic you expect it to be cold when you put your finger on it," he said. The set was built for the 2018 film Watergate, about the scandal involving President Richard Nixon, and recently featured in a BBC News report by John Simpson.

Murphy said: "I was nervous the day Watergate's director Charles Ferguson arrived but the expression on his face was priceless, he couldn't believe the set."Reflecting on the future after 2020, he said: "It's been a tough year with Covid-19 but we've managed to keep going by changing production models and editing at home. All we can do is keep adapting."