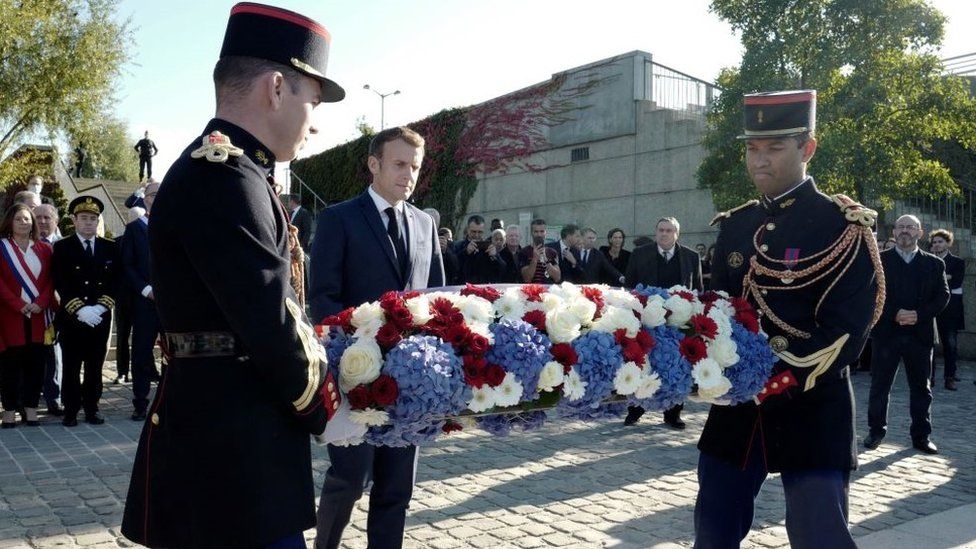 French President Emmanuel Macron has called a bloody crackdown on Algerian protesters by police in Paris 60 years ago an "unforgivable crime".
On 17 October 1961, French police turned on Algerian demonstrators. Some were shot, others were drowned.
The precise number of victims is not known, but some say several hundred could have lost their lives.
Mr Macron is the first French president to recognize that crimes were committed that day.
He joined a commemoration beside the bridge over the River Seine which was the starting point in 1961 for a march against a night curfew imposed only on Algerians.
Mr Macron told relatives of victims on the 60th anniversary of the bloodshed that "crimes" were committed under the command of the notorious Paris police chief Maurice Papon. Papon was revealed in the 1980s to have collaborated with occupying Nazi forces in World War Two in transferring Jews to Nazi death camps.
The 1961 march was repressed "brutally, violently and in blood", Mr Macron's office said in a statement. Some 12,000 Algerians were arrested, many were wounded and dozens killed, it added.
But activists hoping for an even stronger recognition of responsibility were left disappointed.
Mr Macron stopped short of an apology and did not give a public speech, with the Elysee issuing only the written statement.
The president's statement "is progress but not complete. We hoped for more", Mimouna Hadjam of the Africa93 anti-racism association told the AFP news agency.
"Papon did not act alone. People were tortured, massacred in the heart of Paris and those high up knew," Hadjam added, calling for recognition of a "state crime".
Historian Emmanuel Blanchard said that Mr Macron's comments represented "progress" and had gone "much further" than his predecessors.
The massacre, which happened during the war against French rule in Algeria, was denied or concealed by French governments for decades.
The first commemorations of the event were organised in 2001 by the mayor of Paris.