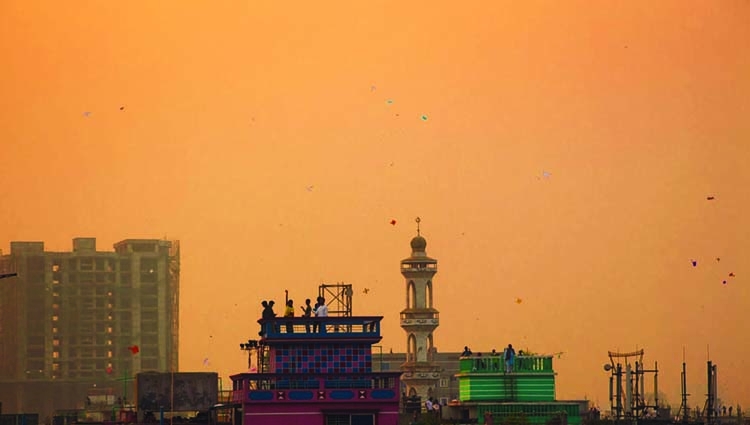 Bangladesh has six seasons, winter is now in atmosphere. This is the departure of Poush as the Bengal month. A traditional festival surrounds the last day of this Poush month in the land of the thirteenth Parvan in twelve months. To the residents of old Dhaka, which is known as the Shakrain festival, some people called it Poush Sankranti.
Shakrain festival is celebrated every year on 14th January in Puran Dhaka. However, the original Hindu families of Shakharibazar celebrated this festival one day later, on 15th January. With great enthusiasm and excitement, everyone like young and old, got involved in this festival.
From the beginning of the day, there was a rush to make cakes at home in old Dhaka. Colourful kites fly in the sky in all these areas throughout the day. Kites are flown while standing on the roof or on the road. Most of the time there is a kite-fighting competition. One competes to cut the other's kite thread.
On Thursday (January 13), a festive atmosphere prevailed in Old Dhaka. Old Dhaka's Shakharibazar, Tatibazar, Laxmibazar, Sutrapur, Gandaria, Lalbagh and surrounding areas are being prepared for the Shakrain Festival. The roofs of most of the houses are being decorated with sound system and lighting.
Crowds of shoppers have increased in the kite and fireworks shops of Shakharibazar. Talking to some of the shopkeepers of Shakhari Bazar, it is known that kites of different shapes are made here and their names are also very nice such as khokdar, pandar, baldar, dabadar, lejwala, patang etc.
They also said that the price of ordinary kites is between 5 to 25 taka, while the price of various designed kites is more than 150 to 600 taka. Indian and Chinese kites are also available in the shops. They make and import the kites themselves with the necessary materials during this shakrain festival.

However, lanterns and fireworks are not being sold directly in Shakhari Bazar due to accidents in different places during the English New Year celebrations. However, Selling is running secretly. At the head of some alleys in the Shakharibazar area of old Dhaka and at the corner of the shop, some young men and teenagers stood at a distance. Most of them are between 15 and 22 years of age.
When someone comes to buy and searches, one way or another the boys standing in the corner of the alley and the shop get noticed. Then four or five people came and appeared. Calling into the alley and bargaining. This is how the selling of fireworks is going on with the help of the administration.
Ajay Sen, a kite shopkeeper in ShakhariBazar, said, "I have been picking up all kinds of goods for shakrain in the shop since the beginning of the year. The government's ban has started again, so the sales are getting less."
Nur Islam, who came to buy kites, said, "I have bought three types of kites, the yarn and the latai are already there. I will go home and do some work for the kite then after two days of saccharin we will fly kites on the roof of the house all together, we will sing but do not grow up again may be my friends will be limited to playing shakrain."
A student of Jagannath University asked if there were any restrictions on flying lanterns and setting off fireworks in Shakrain this time, Sutrapur Police Station OC Moinul Islam said, "It is basically the DMP Commissioner Sir's instructions from the police headquarters. It is forbidden to fly lanterns like every time, but we will try to prevent it if it is flown in isolated places. This time, since Omicron is alert, we are managing it that way. We will ensure that no public gatherings take place in Shakrain."
-- Md Minar Hossain, AA