A recently released research report shows that by late 2017 only 13 percent of Bangladeshis aged 15-65 used the Internet and social media. This is despite 45 percent of the same age group owning an Internet-friendly device.The findings are part of AfterAccess, an international-award-winning effort to collect reliable data on access to and use of mobile phones and the Internet in the Global South.
The Bangladesh-specific results of the AfterAccess surveys were released by a regional ICT-policy think-tank, LIRNEasia, in a city hotel on Tuesday. Brig Gen Mustafa Kamal, DG (Engineering & Operation) BTRC, Michael Foley, CEO, Grameenphone, Mahtab Uddin Ahmed, CEO, Robi, Taimur Rahman, Chief Corporate & Regulatory Affairs of Banglalink, Abu Saeed Khan, Senior Policy Fellow, LIRNEasia were present, among others.
"Mobile phones and the Internet are becoming ubiquitous, and information on access to and use of mobile phone and the Internet are of prime importance to governments and other decision-makers," said lead researcher for the Asia component, Helani Galpaya, CEO of LIRNEasia.
"The available information is insufficient, in that it is either supply-side provided, or not representative of national populations. The only meaningful way to understand the real level of access and use is by talking to users (and non-users) directly. This is what we have done with the AfterAccess surveys."
In Bangladesh, 2,000 households and individuals were surveyed from 100 wards and villages in 40 districts. The sampling methodology was designed to ensure representation of the target group (population aged 15-65) at a national level with 95% confidence interval and a 3.3% margin of error.The methodology used in Bangladesh is comparable across all 18 survey countries in Africa, Asia and Latin America.
"This report highlights key issues in our telecommunications sector and provides deep insights on disparity in use of mobile phones, Internet, social media and platforms," said Abu Saeed Khan, Senior Policy Fellow of LIRNEasia. "It also underscores the potential for growth of a Digital Bangladesh, and we must use this data to inform future policy, regulatory and industry decisions."
Sixty-seven percent of Bangladeshis aged 15-65 who do not use the Internet said the main reason for not using the Internet is that they do not know what it is. This finding highlights the importance of creating awareness on the Internet and its uses among the population.
This research was conducted with financial support from the International Development Research Centre (IDRC), Canada, the UK Government's Department for International Development (DFID), the Ford Foundation and the Swedish International Development Cooperation Agency (SIDA). 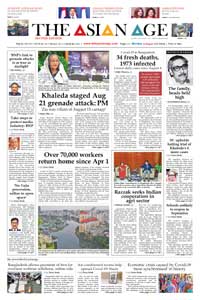