A pioneer of Bengali printing industry

Upendrakishore Ray Chowdhury was a famous Bengali writer, violin player and composer, technologist, entrepreneur and a pioneer of Bengali printing industry. He was the father of the famous writer Sukumar Ray and grandfather of the renowned filmmaker Satyajit Ray.
Upendrakishore Ray Chowdhury was a product and leading member of the Brahmo Movement that spearheaded the cultural rejuvenation of Bengal. He collaborated with the Tagores whose family, in the arts, achieved world renown. As a writer he is best known for his collection of folklore; as a printer he pioneered in India in the art of engraving and was the first to attempt color printing at the time when engraving and color printing were also being pioneered in the West.
Upendrakishore Ray Chowdhury was born in the village Masua in Mymensingh district on 10 May 1863. His early name was Kamodaranjan Roy. At his age of five, one Hari Kishore Roy Chowdhury, a relative of Upendra's father Kalinath Roy received him as an adopted son. He was then renamed as Upendrakishore Roy Chowdhury. Upendra passed the Entrance examination in 1880 with scholarship from Mymensingh Zila School. He studied for a while at Presidency College in Calcutta but passed BA examination in 1884 from Calcutta Metropolitan Institute.
He became an expert in drawing during his school-life. His first literary work was published in the famous juvenile magazine Sakha when he was a BA student in 1883 and from then on continued his literary work. Upendra played a pioneering role in the fields of Bangla juvenile literature by creating rhymes, folktales, fairytales, mythological tales, and science fiction adding fine drawings. He started publishing a monthly juvenile magazine Sandesh under his editorship which is now-a-days the most popular juvenile magazine published from Calcutta. 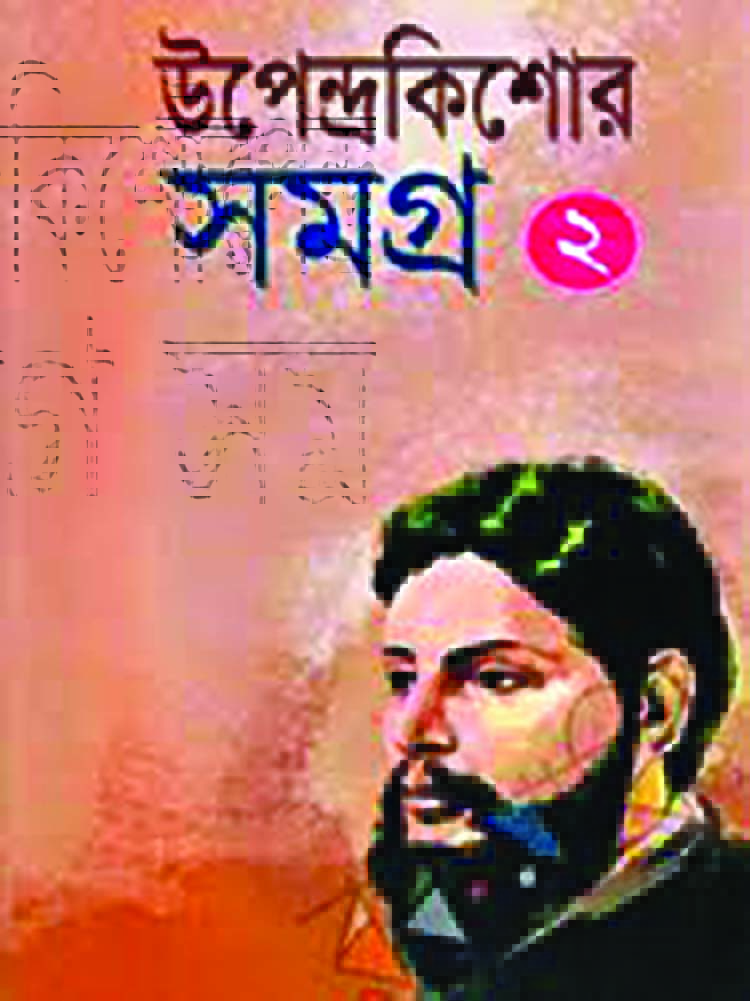 Upendrakishore first introduced modern block making, including half-tone and color block making, in South Asia. When the reproduction using woodcut line blocks of his illustrations for one of his books, "Chheleder Ramayan" was very poor, he imported books, chemicals and equipment from Britain to learn the technology of block making. After mastering this, in 1895 he successfully set up a business of making blocks.
He experimented with the process of block making, and several of his technical articles about block making were published in the Penrose Annual Volumes published from Britain. He also went on publishing books, but initially he had them printed in other printing presses. In 1913 he founded what was then probably the finest printing press in South Asia, U. Ray and Sons at 100 Garpar Road.
Even the building plans were designed by him. He quickly earned recognition in India and abroad for the new methods he developed for printing both black & white and color photographs with great accuracy of detail. It was with the intention of running this business that his son Sukumar Ray spent a few years at the University of Manchester's printing technology department.
He invented several techniques related to halftone block making, of which the "screen-adjusting machine" for the automatic focusing of process cameras, was also assembled in England following his design.
The British handbook of printing technology, the Penrose Annual, Volume X, 1904-05, mentioned about him in an editorial note that, "Mr. Ray is evidently possessed of a mathematical quality of mind and he has reasoned out for himself the problems of half-tone work in a remarkably successful manner ... (His printing developments) enable the operator to do uniform work with the fullest graduation and detail in it and with the minimum amount of manipulative skill in the negative-making and etching." The Penrose Annual Volume XI of 1905-06 published his paper about the new technique of 60-degree screens in halftone block making.
Upendrakishore started an experiment on the printing of halftone pictures by establishing studio, darkroom, etc in 1896. He prepared various diaphragm, ray-screen adjuster, etc by research and became the inventor of biotype and ray-print process. Upendra wrote a number of books, of which most important are Chhotoder Ramayan (1894-1895), Sekaler Katha (1903), Chhotoder Mahabharat (1909), and Mahabharater Galpa (1909). World famous filmmaker SATYAJIT RAY was his grandson. Upendrakishore Roy Chowdhury breathed his last on 20 December 1915.