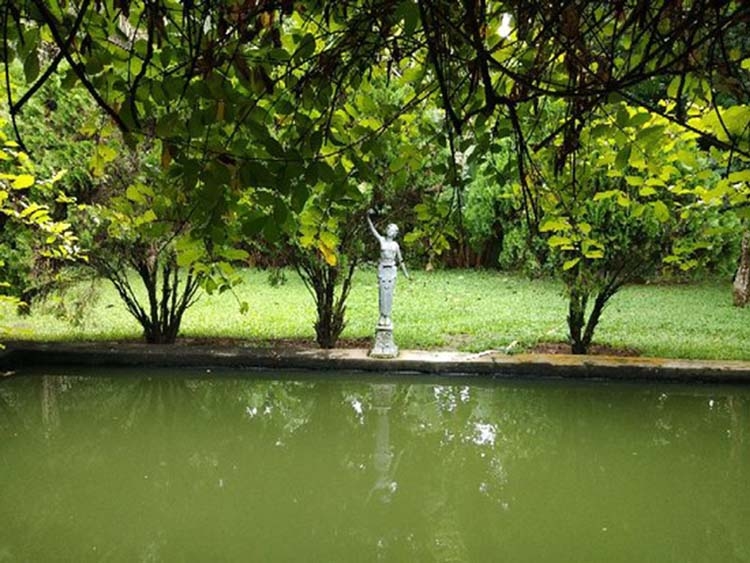 Nuhash Polli was founded in 1997. Initially it covered 22 bigha of land. Now it covers around 40 bigha. Actor Dr. Ejaz helped procure the land. The heavenly 'village' was named after Nuhash, Humayun Ahmed and Gultekin Khan's (his first wife) son. Ahmed was very fond of music.
He loved to live amidst nature and relished the date plantation, which he had set up inside Nuhash Polli. Most paths in Pirozali village, under Mirzapur union of Gazipur Sadar Upazila, are lined with thick Shal forest. One path with its beautiful play of light and shadow, welcomes passers-by, leading them towards Nuhash Polli, 25 km from Gazipur Sadar.
This was the heaven of Humayun Ahmed, a magician of words, who spent most of his time there after he started directing TV plays and films. Nuhash Polli was open to the public and visitors would traverse great distances to get a view of the picturesque estate.
There is a dighi (big pond) at the extreme north end of Nuhash Polli. A wooden bridge has been constructed over the pond. A tent was placed on an artificial island in the middle of the pond. Humayun Ahmed's wife, Meher Afroz Shaon, conceived a daughter who died before seeing the light of day. Ahmed called her Leelaboti, after whom the pond was named. Ahmed also wrote a multi-volume novel called "Leelaboti".
A building called 'Bhutbilash' was constructed adjacent to the pond while Ahmed was receiving treatment in USA. The last time he visited Nuhash Polli, inaugurated 'Bhutbilash', hoping to behold a 'ghost', seated by the veranda of 'Bhutbilash' at midnight.
Nuhash Polli houses a large number of sculptures crafted by local sculptor Asaduzzaman Khan. Spectators cannot but be impressed by a sculpture, 'Ma O Shishu' (mother and child) at the entrance to Nuhash Polli. Ghost- shaped and frog-like sculptures have been made to amuse children. A tree house is a delight for children.
Ahmed enjoyed rainfall and moonlit nights. He created a room called "Brishti Bilash' from where he could observe the pattering rain. The green yard was always kept clean and tidy to indulge Ahmed's passion for watching the waxing and waning moon. The manager of Nuhash Polli, Bulbul, led a nine-member team in overseeing the overall management of the idyllic locale.
Whenever Humayun Ahmed travelled within and outside the country, he would collect various types of trees. About 300 species of medicinal and fruit trees can be found within the precincts of Nuhash Polli.
The writer also had a tea plantation at Nuhash Polli, which still exists. Initially, Ahmed accompanied his guests while they wandered through the Nuhash Polli estate. He introduced the visitors to various species and would invite them to taste the leaves of a particular scented tree.
A swimming pool stands near the bedroom of the deceased writer. He would swim there at times with his dear ones. Once he swam with noted Indian litterateur Sunil Gangopadhyay. Nuhash Polli was Ahmed's favorite shooting spot for almost all the TV plays and films directed by him.

How to goNuhash Polli is located around 8 km east of Hotapara bus-stand of Dhaka-Mymensingh Road. You can take buses from Dhaka or Mymensingh like provati-bonosri through Sripur, Maona, Kapasia to Hotapur. Fare is around 50-70 taka per person. You can get to Nuhash Polli from Hotapara bus stand by tempu/richshaw/baby-taxi, fare is 30 taka for tempu, 50-60 taka for rickshaw and 100-120 taka for taxi.

Where to stayThe hotel management is very good here. You can get different types of hotels here. If you want less priced hotel then you will get it & if you want good hotels then there is also no problem.

Eating facilitiesThere is no hotel or restaurant for meals inside Nuhash Polli. If you go there individualy or with a small group less then 10 people, you should arrange the food yourself. Otherwise for big group (more than 10 persons), you can place order with Nuhash Palli administration.