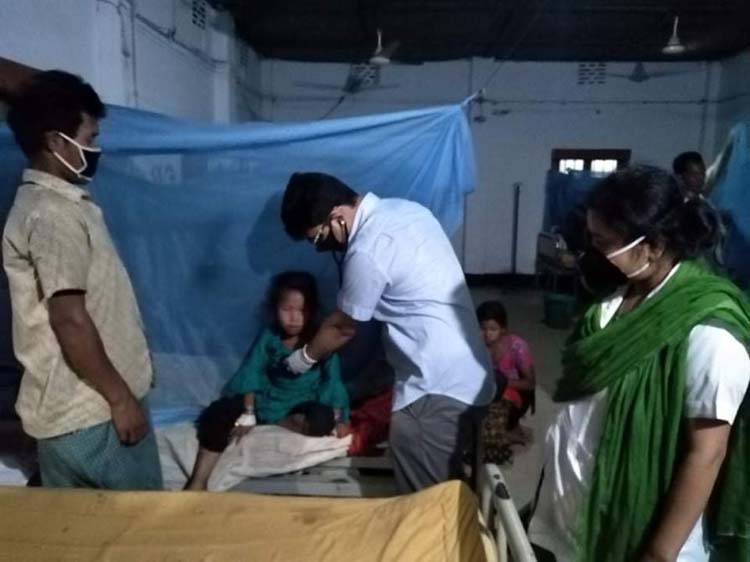 A doctor is checking-up health of a child at Upazila health complex in Dighinala Upazila of Khagrachhari.
Not only Bangladesh but also the world is busy with handling the disastrous effects of COVID-19. And this is important. Due to this, Coronavirus affects thousands of people who have died, more than three hundred thousand people are infected, and millions of people around the world are losing their jobs.
In Bangladesh, the cases are similar, and the government has initiated a nation-wide lockdown.
However, since February this year (2020) in the remote areas of Rangamati, Bandarban, and Khagrachari was hit by measles. The outbreak hit so hard in Rangamati's Baghaichari Upazila and Bandarban's Lama Upazila, and some villages of Khagrachari. In the last two months, more than 350 were infected by this Measles. And the death toll reached to 10.
Measles is a highly infectious illness caused by the rubeola virus. Measles is a viral disease that can spread rapidly. Also known as rubeola or morbilli, Measles is an endemic disease, meaning it is continually present in a community, and many people develop resistance. However, if measles enters an area where the people have never been exposed, and the result can be devastating.
The children who died of measles belonged to the Chakma, Tripura, and Mro communities. These communities live in very remote places in the CHT area of Bangladesh. And new parts of those communities are infected regularly since the outbreak started from February this year in these areas of CHT.
The people in those communities blamed the ignorance of the government towards them. They claimed that the government had not reached peoples' homes with immunization programmed and healthcare services.
There is no regular medical care in that area and no health care facilities for the inhabitants of those indigenous community people. Some of the affected families are severely poor that they cannot bear the cost of treatment.
Bangladesh Army, on the other hand, is doing an excellent job in the area. They are providing partial medical care to infected people. Some of the children were critically affected by Measles that they couldn't be treated locally, and that is why they had to take to the more prominent hospitals with higher facilities.
Some of the patients with critical conditions were flown to Chattogram by helicopter by Bangladesh Army.
Government officials in the area have accepted the fact that the Expanded Program on Immunization (EPI) program was not implemented in the measles affected areas properly.
Besides, there are rarely any medical facilities in those remote areas. After the outbreak in different Upazilas, medical teams were formed with a minimum of one MBBS doctors in it. And it was their responsibility to observe the situation of the measles outbreak in those particular Upazilas.
Many medical officers of those medical teams formed by Upazila Nirbahi Officers (UNO) claimed that affected children are suffering from acute malnutrition. In Sajak Union, there are only two community clinics for over 16,000 people living in those areas, and they are mostly ethnic minority communities.
Why are people of Bangladesh still out of the government's immunization program? Why is there a lack of medical facilities? Bangladesh's government has already declared this country as food sufficient, and then there are children with malnutrition? CHT has a history of rebellion and due to this inequality between the hills and the mainland Bangladesh.
Let us not go into that debate. But we all must agree that those measles outbreak affected areas are severally underdeveloped. Many social and humanitarian organizations have expressed concern over the outbreak.
Now government authorities should seek the way that how they could get to the peoples' home with immunization programs and healthcare facilities of those ethnic minority people of the CHT.
In addition, there is a commitment from the government to set up community clinics, sanitation, nutrition, and water management program in the affected areas. The government officials and people representatives should see how these programs can be implemented in the earliest possible times.
Bangladesh has done overwhelming development in the economic sector, and Asian Development Bank has reported that if this country can manage the COVID-19 well, then at the end of the crisis, the country's economy will be the strongest.
To ensure the benefits of these economic developments towards the citizens of the country, we should make sure that those people in the hills get their share. Otherwise, keeping one part deprived and endangered, the other party will not be happy for long. Now the government should take necessary steps to ensure no more children from the ethnic minority from the hills don't lose their lives due to the measles outbreak.
(We acknowledge different sources with gratitude.) 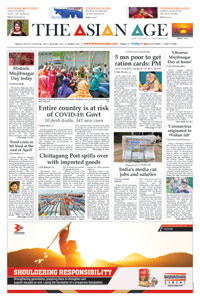