Professor Anisuzzaman: Demise of a colossal figure in Bengali literature 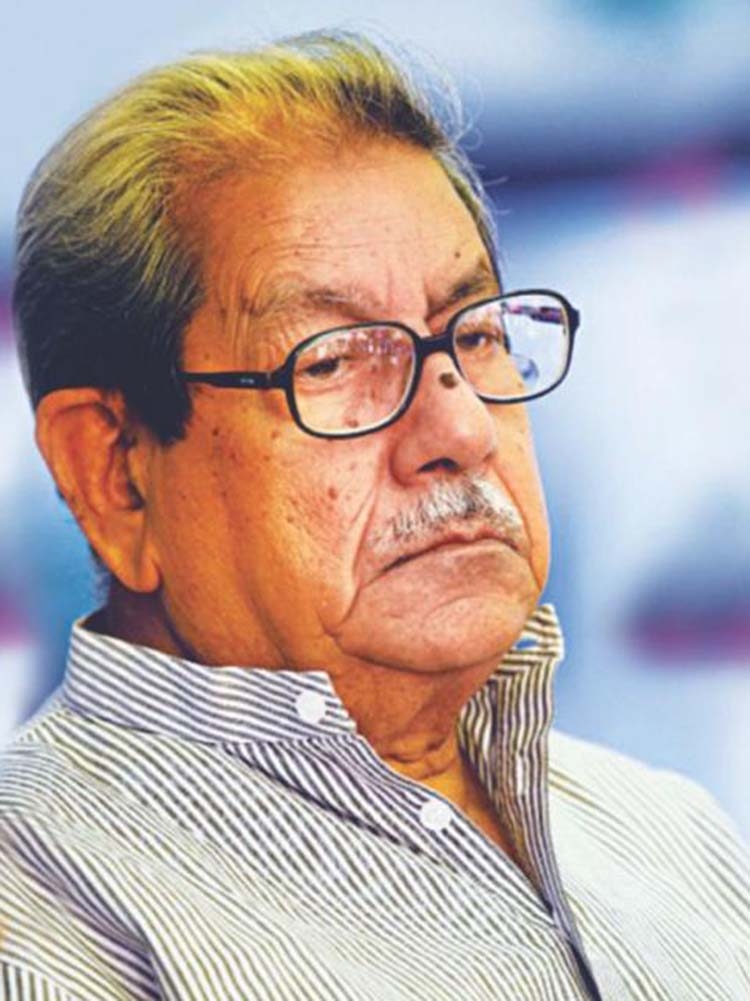 National Professor Anisuzzaman
Professor Anisuzzaman, a colossal figure in the world of Bengali literature passed away yesterday afternoon at 4:55 pm at Combined Military Hospital, Dhaka. He was suffering from age related complications for a pretty long time. It was really The Almighty's blessings that he did not have to suffer for long. As a person he was absolutely a transparent personality travestying across difficult situations anyhow that did not prevent him from carrying on with his noble tasks which was his life's forte.
Professor Anisuzzaman was just like a fatherly figure to modern writers which was a blessing to us. This writer had the privilege of having fond memories with this savant which will remain irreplaceable forever. It is just like a memorable philosophical quote 'birth and death are integral parts of human life. When call comes from the above it is not the family members along with medical professionals could prevent us from departing for eternal peace and salvations.'
Now let me touch upon the lives of this colossal figure. Professor Anisuzzaman was born in the year 1937 on February 18 in erstwhile undivided Bengal. He spent his early childhood at Kolkata till the year 1948. That was the reason Professor Anisuzzaman had firm grip over the social and cultural milieus of the Indian state of West Bengal.
All over West Bengal the intelligentsias carry warm reverence upon him mainly because of his cordial and warm demeanor towards each and every section of human beings of West Bengal. He passed his Intermediate from Jagannath University followed by BA (Hons) in Bengali and subsequently MA in Bengali in 1957. He was also the contemporary to Dr Sisir Kumar Das, another legend in the world of literature from the Indian state of West Bengal.
Professor Anisuzzaman wrote several books in Bengali and English on account of which he received innumerable encomiums from cross sections of the people of Indian state of West Bengal and Bangladesh. Some books written by Professor Anisuzzaman are stated as follow:
*    Muslim Manas o Bangla Sahitya
*    Swaruper Sandhane
*    Bangali and Bangladesh
*    Purano Bangla Gadya
*    Bipula Prithibi
*    Muktijudhyo and Tarpor
*    Amar Ekattor
*    Amar Chokh
*    Bangali Nari- Sahityo o Samaje
*    Creativity, Identity and Reality
*    Cultural Pluralism
*    Identity, religion and recent history
Professor Anisuzzaman was associated with various academic bodies in Bangladesh as well as in the international arena. He was appointed as the faculty member of the University of Dhaka from the years 1959-1969, 1985-2003 and 2005-2008. He taught Bengali at the University of Chittagong from 1969 to 1985.
From 1978 to 1983, Professor Anisuzzaman was associated with various research projects of the United Nations University. Apart from the above assignments he was a visiting fellow at the University of Paris (1994), North Carolina State University (1995) and University of Calcutta (2010). Professor Anisuzzaman also had the honor of being appointed as visiting professor of Viswabharati University at Shantiniketan, India.
During the War of Liberation of Bangladesh, Professor Anisuzzaman was also appointed as member of the Planning Commission Board as well as member of National Education Commission after Independence of the Country in the year 1971. He participated in the Martyrs Language Movement of the year 1952, Mass Uprising of the year 1969, War of Liberation Struggle (1971) as well as during the Anti Autocracy Movement of the year 1990.
As a person Professor Anisuzzaman was purely a secular minded personality. Among his students he was deeply revered. He was also the teacher of Prime Minister Sheikh Hasina.
The honors which Professor Anisuzzaman received in his complete life are stated as follow:
*    Ananda Puraskar (2017) due to Bipula Prithibi (India)
*    Padma Bhusan (2014): On account of his contribution to education and literature (Government of India).
*    Bangla Academy literary Award (1970)
*    EkusheyPadak(1985)
*    Ananda Puraskar( 1994) for cassettes of  14 series by the name of Oittejjher Ongiker.
*    Honorary D.Litt by Rabindra Bharati University (2005), India
*    Jagattarini Medal, CU, India
*    Independence Day Literary Award, government of Bangladesh for literature ( 2015)
*    Sarojini Basu Award (2008) by CU
Thus an era has come to an end. Professor Anisuzzaman will be fondly missed by all his ardent well wishers and friends cutting across countries and international boundaries. His cordial encouragement to the young writers will be dearly missed forever. Literary loving Bengalis will feel his absence forever as the loss of a colossal figure in Bengali literature as well as global ones.  He has departed to a new world but it is our sincerest desire: May this pure soul remains in peace wherever he is!