Kamal Lohani is a man of inspiration 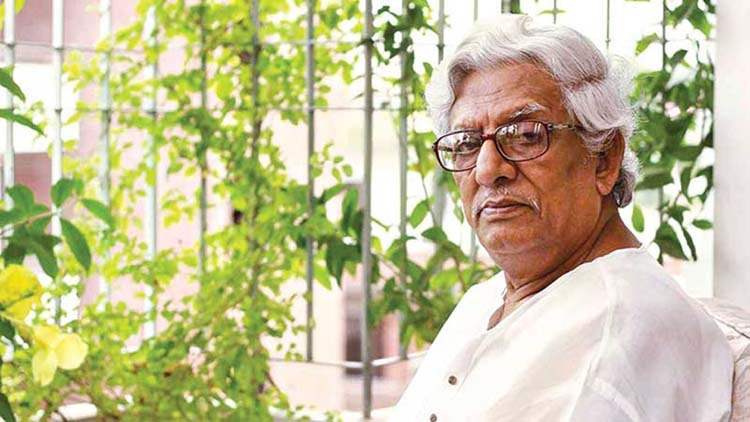 Kamal Lohani was simultaneously a leading figure in the cultural movement of Bangladesh, a legendary journalist, a language activist, a heroic freedom fighter and a former director general of the Bangladesh Shilpakala Academy.
Comrade Kamal Lohani, who was multi-talented, was the inspiration and beacon of the progressive movement in our country. He is a guardian and guide to the leaders and activists of the left-progressive movement. He was a constant companion of the Communist Party.
Although known as Kamal Lohani, his full name is Abu Naeem Mohammad Mostafa Kamal Khan Lohani. He was born on 26 June 1934 in Khan Santala village of Ullapara police station in Sirajganj.
At the age of seven, he lost his mother.  Then, in the horrors of the Second World War, he started his education at Shishu Vidyapeeth in Calcutta. After partition he moved to Pabna in 1948. He passed the secondary examination in the year of language movement from Pabna district school. At this time he became involved in politics.
He joined the Communist Party of East Pakistan. In Pabna he joined the movement for the state language of Bengal. In the meantime, after graduating from Pabna Edward College, he ended his formal education. Then he joined politics, journalism and culture movement.
He was first arrested in 1953 for protesting against the arrival of Nurul Amin at the then Jinnah Park (now the stadium) of the Muslim League Council in Pabna. He was arrested again in 1954 for working for the United Front.He was later jailed a few times and was also in jail along with leaders like Bangabandhu Sheikh Mujibur Rahman and Tajuddin Ahmed. At one stage he became involved in leftist politics.
After his release from jail in July 1955, Kamal Lohani moved to Dhaka due to a family dispute. He started his career with the daily Millat in the same year with the help of his cousin Fazle Lohani.  The same year he joined the NAP and became active in national politics. He went into hiding after martial law was imposed in 1958.
After coming to Dhaka, Kamal Lohani became interested in dance. On behalf of Bulbul Fine Arts Academy, Kamal Lohani took part in the production of his dance guru GA Mannan's 'Nakshi Kanthar Math'. He visited several countries, including the Middle East, on behalf of the Pakistan Cultural Group.  In the meantime, he worked for the daily 'Azad', the daily 'Sangbad' and 'Purbodesh'.
Kamal Lohani married his cousin Syeda Dipti Rani in 1980. On November 24, 2007, his wife passed away. After the death of his inspirational wife Dipti Lohani, he became alone. The couple has one son and two daughters Sagar Lohani, Bonya Lohani and Urmi Lohani.
He had a strong role against the government's ban on celebrating Rabindra's birth centenary in 1961. He was praised for her role as Vajrasena in the centenary celebrations of the Shyama dance drama. After a short imprisonment in 1962, Kamal Lohani became the general secretary of Chayanat.
After performing this duty for four and a half years, he formed a cultural organization called 'Kranti' in 1967. During the war of liberation Kamal Lohani was in charge of the news department of Swadhin Bangla Betar.  On December 25, 1971, he took charge of Dhaka Betar.  After taking charge, he focused on rebuilding the destroyed radio station.
On the occasion of Bangabandhu's return to his homeland on 10 January 1972, Kamal Lohani gave a sermon from Dhaka's Tejgaon Airport. He also gave a briefing at Dumdum Airport on the occasion of Bangabandhu's visit to Calcutta in February 1972.
He became the executive editor of 'Dainik Barta' published from Rajshahi in 1977. In 1978, he was appointed as editor. In 1981, after a disagreement with the then Information Minister, he left Dainik Barta and joined the Bangladesh Press Institute (PIB).  A few months after taking over as director of publications and editor of Depthnews Bangladesh, he was appointed as associate editor.
In 1991, during the first caretaker government, he became the Director General of Bangladesh Shilpakala Academy.In 2007, he again served as the Director General of the Shilpakala Academy for two years. He was the president of Bangladesh Udichi Shilpi Gosthi for four years.
He also served as the President of Dhaka Journalists Union  Apart from this, he is also a member of the Communist Party of Bangladesh (CPB)  Kamal Lohani was also associated with the Ekattorer Ghatak-Dalal Nirmul Committee and Sammilita Sangskritik Jote.
Among the books written by Kamal Lohani are 'Amra Harbo Na', Sotti Kotha Bolte ki', 'Jeno Bhule Na Jai', 'Muktisangram E Swadhin Bangla Betar', 'Politics Muktijuddha, Swadhin Bangla Betar', 'Muktiyuddha Amar Ahankar', ' E Desh Amar Gorbo ','Amader Sanskriti-Sangram ','Loraier Gaan', Drohe Preme Kobitar Mato' and 'Shobder Bidroho'.
Kamal Lohani received the Ekushey Padak in 2015 for his special contribution to journalism. He has also received many awards and honors including the bicentennial award of Calcutta Municipality, Press Institute of Bangladesh Freedom Fighter Journalist Award, Rajshahi Writers Association Award, Kranti Memorial, Sage Award and Memorial, Jahanara Imam Medal.
After living a long life of struggle for 87 years, on June 20, this sun of the rebellious nation left for the land of no return. His death has caused irreparable loss to the cultural arena and progressive movement of this country.
The outstanding role played by Kamal Lohani in the struggle for the rights of politics, culture and media industry will always inspire the new generation and will always spur them in the way of life.
Great human beings never die, his struggling life, progressive movement, uncompromising leadership will always be a beacon of inspiration for us. I express deep shock at the demise of Kamal Lohani.


The writer is a poet and columnist.