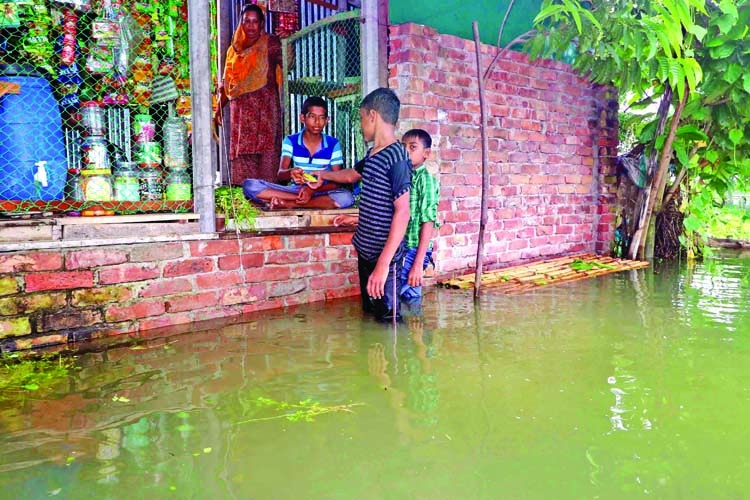 Flood has affected many neighborhoods outside the capital Dhaka inundating scores of houses and shops. The photo was taken from Vakurrta under Savar. -Zahidul Islam/AA
The flood situation has worsened further in the Brahmaputra and Meghna basins due to the onrush of hilly water coming from the upstream. As the major rivers of the basin are flowing above the danger level at ten points, flood situation deteriorated in many areas on Thursday, according to the officials of Bangladesh Water Development Board (BWDB). The situation worsened in Kurigram, Gaibandha, Jamalpur, Bogura and Sirajganj districts, while continued improving in Rangpur, Nilphamari and Lalmonirhat during the last 24 hours till 9 am yesterday.
The flood situation may worsen further in Kurigram, Gaibandha, Jamalpur, Bogura and Sirajganj and improved in Lalmonirhat, Rangpur and Nilphamari districts during the next 24 hours from Thursday.
The flood scenario would deteriorate in Kurigram, Gaibandha and Nilphamari districts, the officials said.
According to the Flood Forecasting and Warning Centre (FFWC), the Brahmaputra was flowing 55 cm above danger level at Noonkhawa point and 62 cm at Chilmari point, while Dharla 90 cm above at Kurigram point, Ghagot River was flowing 62 cm above at Gaibandha point and Kartoa 33 cm above the danger level at Chak Rahimpur point at 9 am on Thursday.
The Jamuna was swelling up 89 cm above the danger mark at Fulchhari point in Gaibandha, 96 cm at Bahadurabad point in Jamalpur, 97 cm at Sariakandi point in Bogura, 74 cm at Kazipur point and 66 cm at Sirajganj point at 9 am.
BWDB chief engineer for Rangpur Zone Jyoti Prosad Ghosh said water levels of the Teesta may continue to recede in Rangpur, Lalmonirhat and Nilphamari, while Dharla, Brahmaputra and Jamuna will rise in Kurigram, Gaibandha, Jamalpur, Bogura and Sirajganj in the next 24 hours.
New areas of Tangail districts were inundated yesterday, while about 60,000 people in 65 village of Basail upazila have been marooned again.
Due to continuous rainfall over the last few days, different villages in Mirzapur upazila were inundated and a number of bridges collapsed, suspending road communication.
The flood situation continues to deteriorate again in Meghna basin because of continuous rainfall and hilly water from the upstream.
In third phase of flood in Sylhet and Sunamganj, many new areas of 19 upazilas were inundated, making about six lakh people marooned.
River water in Sylhet and Sunamganj continued to rise, while Surma River is flowing over the danger level.
In Sunamganj, crops of a vast area have been submerged, while fish of ponds washed away and homesteads and roads inundated. Flood situation is deteriorating again at Chatak, Jamalganj, Dharmapasha and Shalla upazilas of the districts.
Local administrations have already introduced 295 shelter centres at educational institutions.
All the major rivers in Sunamganj were flowing above the danger levels at 9 am yesterday. Surma River was flowing 145 cm above the danger mark at Chatak point, while Jadukata River in Tahirpur upazila was flowing 59 cm above the danger level.
The water level in Ganges River basin receded for second consecutive day improving the flood situation in char and other low-lying areas there after incessant onrush of water from upstream dwindled.
The receding trend of water level was recorded at Pankha, Rajshahi, Hardinge Bridge and Goalanda points in the last 24 hours ending 9 am on Thursday, said BWDB superintending engineer Mukhlesur Rahman.
The water level of Ganges River decreased by six cm at Pankha point in Chapainawabganj and three cm at Rajshahi point this morning and the river was flowing 191 cm and 193 cm below danger level at the two points respectively, he added.
FFWC executive engineer Arifuzzaman Bhuiyan said the water level of Atrai River decreased by five cm at Mohadevpur point in Naogaon yesterday.
Of the 13 river points monitored in eight districts under Rajshahi division, water levels decreased at eight stations, while increased at five stations in the last 24 hours.
The Gur River was also flowing 77 cm above the danger mark at Singra point in Natore with a rise of three cm afresh, while the Atrai River was flowing 96 cm above the danger level at Baghabari in Sirajganj district.
According to the FFWC bulletin, the water level in Brahmaputra and Jamuna is increasing and it may continue to rise in the next 48 hours.
The water level of Ganges and Padma rivers would remain stable in the next 48 hours, while the water levels in the rivers surrounding Dhaka may continue to rise in the next 48 hours. Of the 101 river points monitored in the country, water levels went up at 57 stations, while decreased at 43 stations and remained stable at one point.
--- BSS