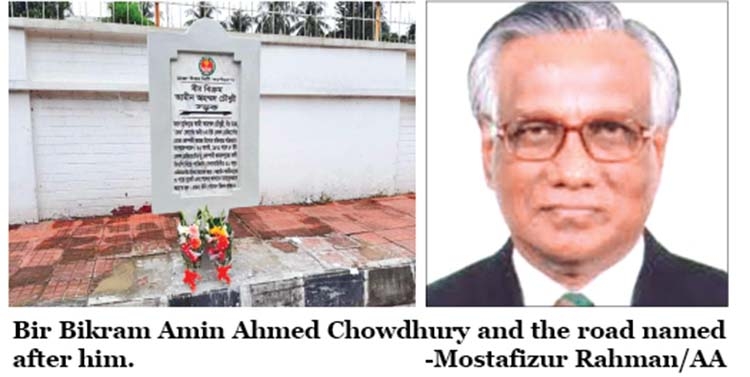 Bir Bikram Amin Ahmed Chowdhury and the road named after him. -Mostafizur Rahman/AA
Amin Ahmed Chowdhury was born in South Anandpur village of Fulghazi in Feni in 1946. He joined Pakistan Army in 1964 and was commissioned in 1966. When the Liberation War of Bangladesh started in 1971, he took part in the war under Z Force and was seriously injured in the combat.
After the Pakistan Army surrendered, he was honored as Bir Bikram which is the third highest gallantry award in Bangladesh. He retired from Bangladesh Army as a Major General. He passed away on 20 April 2013.The name plate marking the Bir Bikram Amin Ahmed Chowdhury Road in Gulshan in front and beside Pakistan High Commission mysteriously disappeared one fine morning.
This has been a contentious issue since 2008. The Pakistan High Commission wanted the plates to be removed from Road no 71, Gulshan Avenue, Dhaka. It was removed with the connivance of some officials and only a name was left behind.There were two name plates indicating the name of the Bir Bikram Amin Ahmed Chowdhury placed on both ends of the Pakistan High Commission by the Dhaka North City Corporation.
The plates contained the history of the Liberation War of 1971 in brief and the gallantry of Amin Ahmed Chowdhury.In 2008, the then Pakistan High Commissioner Alamgir Babar called on the Director General, South Asia Mahbubuzzaman in his office since the Foreign Secretary of that period did not give him time. Alamgir Babar opposed the naming of the road.
The Director General was the son of a martyred engineer of 1971. He told the Pakistan High Commissioner that it was a coincidence that his chancery was situated around the end of road 71 but it was Bangladesh's sovereign choice. And the war of 71 was a reality that Pakistan needs to acknowledge and apologize for the war crimes committed by the Pakistan troops. The Pakistan High Commissioner said not a single word and left.
Today in 2020, some freedom fighters saw that both plates were removed and only one side (end of Gulshan Avenue) has only a marking and the other side has not even a single foundation left which looks strange.When enquired with Dhaka North City Corporation (DNCC) office, the officials said they did not know and then excused themselves saying it must be part of road refurbishment.
The road was named after Bir Bikram Amin Ahmed Chowdhury as he used to live near the United Hospital. He was attacked by the Pushtun Regiment of the then Eastern Pakistan Army on 3-4 August 1971 and got severely injured.The plates were restored on September 12 when freedom fighters brought it to the notice of DNCC Mayor Atiqul Islam. This is the history of 1971 war which the Pakistanis had the audacity to challenge and never apologized.