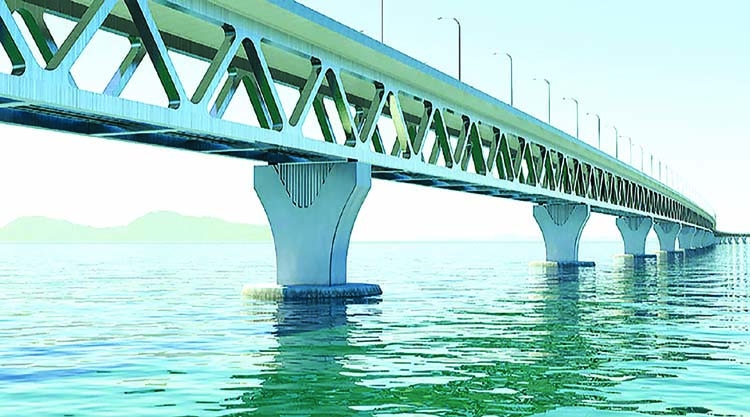 The long-cherished Padma multipurpose bridge has already been visible. The 6.15 km long bridge is expected to be opened for traffic in 2022 next. With the installation of the last span, the bridge ended its close to 90 percent works. It is a must say that the bridge has changed the economic fate of the people living in the least developed southwestern parts of the country. Besides, the bridge would widely support in respect of regional connectivity.
The construction work of the bridge started in December 2015 and the first span was installed on September 30, 2017. Sadly speaking, the World Bank pulled out as lead financier of Padma Bridge with a 1.2 billion pledge, on June 29, 2012, alleging 'credible evidence' of a high-level corruption conspiracy among Bangladeshi officials to misuse money earmarked for the bridge. ADB and JICA also pulled out.
The southwestern part of the country, known as the least developed zone, gradually turns into an industrial hub centering on Padma Bridge. So, it can be said that the bridge brings huge economic prospects in the days to come. The bridge would increase the national GDP growth rate by 1.2 percent and the gross product in the southwest region by 35 percent. It will create employment opportunities for 1.2 percent of the total labor force. Poverty reduction (national level) 1.9 percent per year instead of 1.1 percent. For the southwest region, the expected reduction rate would be 2 percent per year instead of 1 percent (World Bank Study). JICA's study suggests that a 10 percent decrease in travel time to and from Dhaka will lead to a 5.5 increase in district economic output.
The benefit of the project would be equivalent to an annual increase of at least 1.7 percent of the southwest region GDP in value and 0.56 percent of annual increase of national GDP, according to the World Bank project appraisal document in 2011. It also said the poverty reduction rate would increase by 1 percent in the southwest region and by 0.8 percent at the national level. One simulated effect of the bridge derived by use of the national SAM (Social Accounting Matrix) was a 10.2 percent increase in total employment over the base level.
The government has already undertaken a project titled" Padma Bridge Rail Link Project (PBRLP)" to connect the capital city-Dhaka and Jashore with a 169 km rail line. It connects four districts - Munshiganj, Shariatpur, Madaripur, and Narail.  The link is a part of the Trans-Asian Railway Network.
Economic and Social Commission for Asia and the Pacific (ESCAP)- a regional office of UN- agreed to incorporate the Dhaka- Bhanga- Jashore route as part of the trans-Asian Railway Network.
The Trans-Asian Railway (TAR) Network agreement was signed on November 10, 2006, by seventeen Asian nations as part of a UNESCAP's effort to build a transcontinental railway network between Europe and Pacific ports in China.
(1) A northern corridor connecting the rail networks of China, Kazakhstan, Mongolia, the Russian Federation, and the Korean Peninsula
(2) A southern corridor connecting Thailand and the southern Chinese province of Yunnan with Turkey through Myanmar, Bangladesh, India, Pakistan, the Islamic Republic of Iran and Sri Lanka.
(3) A sub-regional network covering the ASEAN and Indo-China sub-regions
(4) A north-south corridor linking Northern Europe to the Persian Gulf through the Russian Federation, Central Asia, and the Caucasus region.
The proposed three routes to be passed through Bangladesh are:
Route 1 - Gede (West Bengal, India) Darshana (Chuadanga, Bangladesh) - Ishwardy-Jamuna Bridge - Joydevepur - Akhaura-Chittagong - Dohazari-Gundhum - Myanmar, Route 2 - Singabad (West Bengal) - Rajshahi (Bangladesh) - Iswardy-Jamuna Bridge - Jodevpur -Akhaura - Chittagong - Dohazari - Gundum - Myanmar and Route 3 - Radikkapur (West Bengal) - Dinajpur-Ishwardy - Jamuna Bridge - Joydevpur - Akhaura - Chittagong -Dohazari - Gundhum - Myanmar.
The bridge would connect the impoverished southwestern region with the economically developed Dhaka and Chattogram. Asian Development Bank in its study said the number of 24,000 transports would play in the beginning. This number surpasses 67,000 in 2050.  By 2030, around 50 million people will be connected with employment. Bangladesh is also ahead of South Asian and other least developed countries (LDCs) in several social indicators. This has widely helped Bangladesh to qualify for graduation from the LDC category in 2018 by fulfilling all three criteria set by the United Nations.
In 2015, Bangladesh became a lower middle-income country from a low-income country as per the World Bank's classification of countries. The country made better performance in achieving the Millennium Development Goals (MDGs) between 2000 -2015. Now Bangladesh aspires to become a developed country by 2041. By 2024, Bangladesh is expected to come out of the LDC category. Since 2015, Bangladesh has been working towards fulfilling the Sustainable Development Goals (SDGs) by 2030.
To attain desired economic growth is possible after the double-deck Padma Bridge opens for traffic, no doubt. Regional trade and commerce among India-Bangladesh-Nepal-Bhutan would be increased. The inflow and outflow of goods and services through the country's two biggest seaports - Chattogram and Mongla must be boosted. Nevertheless, there is a possibility of growing the presence of the holidaymakers in the Sundarbans coming from home and abroad.  The Padma Bridge came as a blessing for the nation. The present government deserves appreciation from all walks of people for building the bridge with funds arranged domestically. To conclude, the industrial revolution across the country begins with the inauguration of the multipurpose Padma Bridge.

The writer is a banker and
economic analyst.
Email: [email protected]