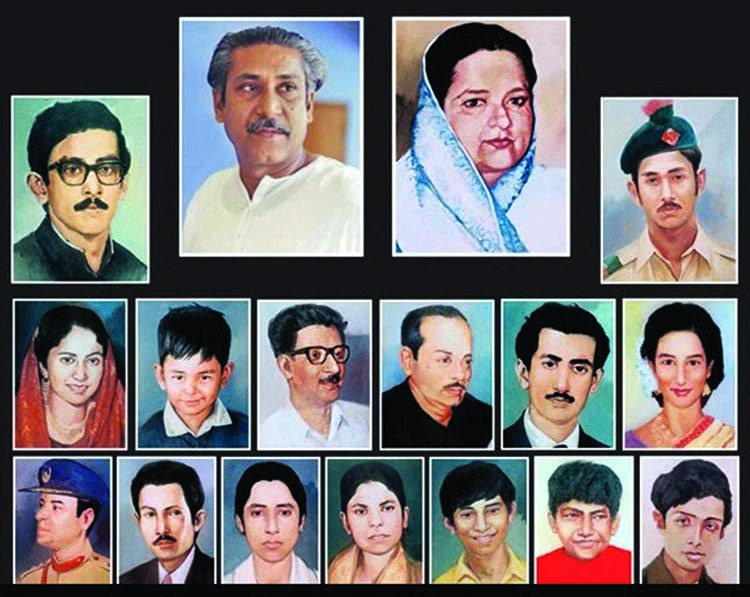 I was just seven years old when I first heard the name Sheikh Mujibur Rahman, but had no idea at that time how one-day he will become our nation's Father, how I will meet him and why. I did not also realise that this man will be the factor which will change our family's lives forever. It was 1968. The fiery Bengali leader was freed after spending time in jail in the famous Agartala Conspiracy Case --- conspiring against Pakistan. But, that was also a part of the man, Sheikh Mujib, to gift us a state named Bangladesh.
One afternoon my father packed us all in his red Volkswagon car and drove to Purana Paltan area of Dhaka. There was a huge crowd and we were introduced to Sheikh Mujibur Rahman and his worthy partner, Bangamata Begum Fazilutunessa Mujib. My father told us who the man and the woman were and listened to the speech of Sheikh Mujibur Rahman. After sometime he turned his car around and we returned to our home in Dhaka Cantonment.
Then my family packed bags to go to Rawalpindi in the then West Pakistan. But, stay there was brief as my father wanted to return to the then East Pakistan. He dropped his posting in the Pakistan Embassy in Jordan as the military attaché and returned to Chittagong in East Pakistan on a two-year deputation. That was September, 1970.
Then came the 1970 elections and Sheikh Mujibur Rahman transformed into Bangabandhu or the Friend of Bengal. He became the leader of all the Bengalis, everywhere. My father was one of those Bengalis who had accepted Bangabandhu's leadership and prepared himself to fight for an independent Bangladesh.
Slogans of "Joy Bangla" and "Joy Bangabandhu" filled the air in East Pakistan. My father joined the chorus despite being in the active service in the Pakistan Army. A flag of a nation named Bangladesh, but yet to be born, was hoisted in our home along with a black flag. It was the same in his office in Chittagong's Panchlais area, just 10 minutes away from out 70 Panchlaish residence.
As the Pakistani Army launched "Operation Searchlight" on 25 March 1971 to kill millions of Bengalis, armed and unarmed, seeking an independent Bangladesh. My father, the army officer, had also secretly prepared to join the fight against the Pakistani Army. At the end of March 1971, he left his family behind to join the war.
Amid the massacre of Bengali men, women and children by the Pakistani Army, my father known as "Bhashani" (Bengali peasanr leader), left to join the war. He reappears suddenly one very early morning, possibly 14 or 15 April 1971 to see his wife, Hasna Hena, who was in an advanced stage with their third baby - named Naweed, but missed the chance or to meet his father as he was born 28 April 1971, 10 days after the family's darkest day.
Then, came the family's Black Day, 17 April 1971.  A dozen Pakistani Army men with a Captain leading the light machinegun totting group barged into our home. My father was arrested and he never returned. He was added to the list of those who went missing during the war. It was in 2007 I traced his grave and he was re-buried in Qadirabad Cantonment, named after him for his contribution to the war, with state honours on the order of Prime Minister Sheikh Hasina.
That 17 April changed the life of the Qadir family forever.It was in 1973 that I walked into the Dhanmondi Road 32 residence of Bangabandhu along with my mother and siblings. A tall man, so tall that I had look up to see his face, came down from the first floor. That was my first meeting with Bangabandhu. We followed him to the old Ganabhaban opposite the Ramna Park.
As Hasna Hena introduced herself and narrated the tragic story of her life in tears. Bangabandhu consoled her and said "I think I know him. Do you have a photograph of your husband?" Then the greatest bengali of all times and Father of Nation, broke down saying "I know him. He came to see me after I was freed from jail in 1968."
"He was a real Bangali. A real patriot and was so eager to do the needful for which I was fighting for my people. It is really sad," the great leader added. "What can I do for you, Ma (my daughter)?" In reply, Hasna Hena said "I am very insecure and there is none to stand by me. I need a job to provide the best education to my children." She got a job, but was forced to quit in poat-1975 situation after being humiliated by the regime.Bangabandhu held me and my siblings close to him and hugged us. As we left he gave us taka 500 each as a gift.
The second meeting was at the same venue, when Hasna Hena requested for a job abroad. It was granted as we were there for the third time in 1974. Dr. Kamal Hossain, the then foreign minister, and Khandaker Musthaque Ahmed, the man who conspired to eliminate Bangabandhu, were present. Bangabandhu asked Dr. Hossain to place my mother in a suitable Bangladesh embassy.
The darkest day in our history came soon to snatch away Bangabandhu from us and killed our dreams. On 15 August 1975, not only Bangabandhu was killed, it also killed the lives of those of us who loved and respected him from the chore of our hearts.
Even after 46 years of his assassination, Bangabandhu, my martyred father's leader and our Father figure, he remains in our hearts and will live on.To conclude, I can say that my memory of Bangabandhu as a person is that of a very kind, loving and affectionate man with deep respect for martyrs, and determination to make Bangladesh a Golden Bengal. Let us all follow him. May his soul rest in eternal peace. Salute!

Nadeem Qadir is the Editor-in-Charge of
the Asian Age and a Dag Hammarskjold Fellow.