Sheikh Russel, deep in my heart 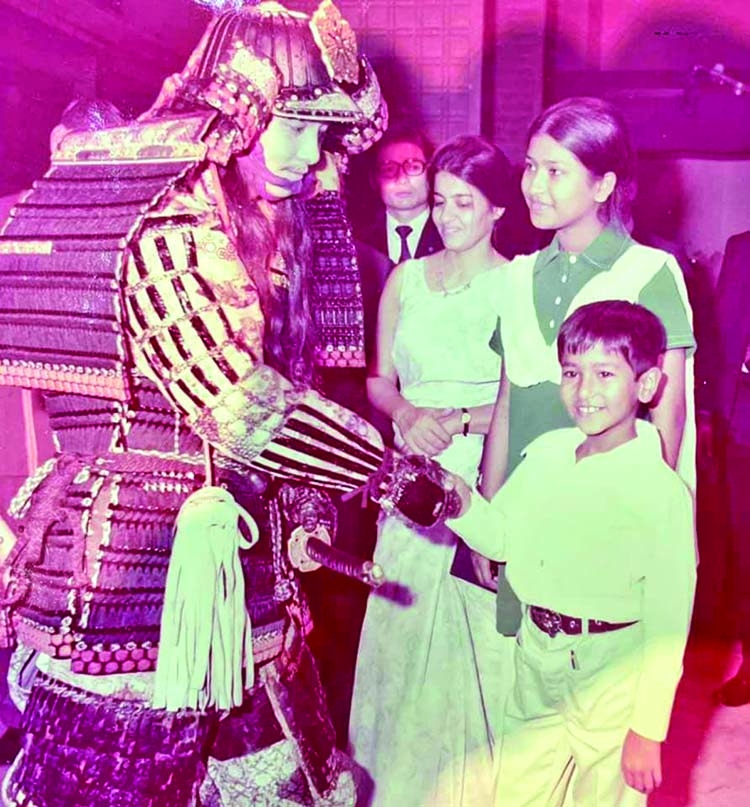 During his stay in Japan, Bangabandhu also had talks with the then Japanese Prime Minister Tanaka Kakuei and Foreign Minister Ohira Masayoshi. Along with the programs in Tokyo and its suburbs, Bangabandhu also enjoyed a local trip to Wakayama, Osaka and Kyoto. The Japanese Premier also hosted a dinner party in honour of Bangabandhu and his travel companions.
Sheikh Russel would have become an ideal political leader today and could have made brilliant contributions to Bangladesh's advancement if he was not murdered on 15 August 1975.
While we were in school, teachers said that today's children are the statesmen of the future world. This maxim came back to my mind while I was thinking about Sheikh Russel, Bangabandhu's youngest son who was born on 18 October 1964.
Awami League gained a sweeping victory in the election of 1970. However, the Pakistani authorities did not hand over power to Awami League. It led to the glorious Liberation War of 1971 under the charismatic leadership of Father of the Nation Bangabandhu Sheikh Mujibur Rahman. India's cooperation to Bangladesh during 1971 and Bangabandhu's unflinching stance brought about our independence. No intimidation could daunt the spirit and valour of Bangabandhu. Bangabandhu had such a strong personality that the Pakistan authorities did not dare to kill him even after detaining him at the beginning of the Liberation War.
The greatest tragedy in Bangladesh's history hit the country when Bangabandhu with most of his family members were assassinated on 15 August 1975 by a group of derailed military officers and their civil patrons. Bangladesh would have in the meantime reached the status of a prosperous country if Bangabandhu was not murdered in 1975.
Once upon a time Bangladesh was called a bottomless basket. Former American diplomat Henry Kissinger attributed this term to Bangladesh. Henry Kissinger opposed the Liberation War of 1971. However, Bangladesh has drastically turned around and has made immense progress in course of time. Bangladesh is regarded as a development role model in the present world. There has been a great deal of socio-economic advancement, infrastructural progress and technological boom in the country during last several years under the firm leadership of Prime Minister Sheikh Hasina.
Sheikh Hasina has been able to transform her grief into strength. She lost almost all her family members on 15 August 1975. She has at this moment nobody to share her feelings with except her younger sister Sheikh Rehana.

The first photograph shows Bangabandhu Sheikh Mujibur Rahman being accorded a red carpet reception upon his arrival in Japan in 1973. Sheikh Rehana, Sheikh Russel and the then Foreign Minister Dr. Kamal Hossain are also seen in the picture. The second photograph shows Sheikh Russel and Sheikh Rehana surrounded by Japanese children.
Bangabandhu Sheikh Mujibur Rahman was very fond of reading books. Books on philosophy, history, global geopolitics, famed politicians were most favorites to Bangabandhu. Bertrand Russell was one of the philosophers that Bangabandhu liked most. Bangabandhu was so much impressed by the philosophical ideas of Bertrand Russell that he named his youngest son after this celebrated philosopher. It unveils the fact that Bangabandhu loved reading philosophic books and he had a strong leaning towards the life stories of esteemed philosophers and global think-tank. It may be added that Bangabandhu, in his Unfinished Memoirs, wrote about his respect for his favourite teacher Syedur Rahman who is known as the Socrates of Bangladesh.
Sheikh Russel was only ten years old when he was killed. If Sheikh Russel was alive today, he would have become an icon to be followed by the country's young generation. He could have fortified the hand of Sheikh Hasina and could have acted as a fountain of inspiration and enthusiasm for youths. Sheikh Russel lovingly called Sheikh Hasina "Hasu Apa". He wanted to go to Hasu Apa just before getting killed. If Sheikh Russel was alive, we would have had a valiant leader to fight communalism and religious bigotry. Sheikh Russel resides deep in my heart.
Sheikh Russel's pictures with Bangabandhu make us feel guilty. Bangabandhu spent a huge part of his life in prisons while fighting for the rights of Bangladeshi people.
Sheikh Russel's memories are cherished and loved by all the patriotic masses of Bangladesh. We do not want to keep Sheikh Russel's name limited just within sporting clubs. As a tribute to Sheikh Russel, a youth grooming center can be launched and its branches should be established all over Bangladesh to provide vocational and technological trainings to young people for human resource development.
Childhood is the sweetest time in everyone's life. Sheikh Russel had a lovely childhood too but the bullets from the guns of killers snatched away his smile too early. Sheikh Russel's immaculate face on the pages of books and newspapers, on posters and on banners remind us of the catastrophe that bolted Bangladesh on 15th August 1975.
At the same time Sheikh Russel is still a source of ardor for today's youngsters who will be driving the country forward in days to come. We will have to transform our sorrow into power by elevating Bangladesh to the status of a developed nation which would be the greatest tribute to the divine memories of Sheikh Russel and the other martyrs who were killed on 15th August 1975.
The history of Bangladesh's struggle for independence is marked with bloodbaths. Bangladesh defeated the Pakistani occupation forces during 1971 by means of the courage, determination and sacrifices of three million martyrs. We got our nationhood, our flag and this beautiful landscape by fighting the fierce war of 1971 under the unwavering leadership of Bangabandhu Sheikh Mujibur Rahman.
However, the anti-liberation platforms who opposed Bangladesh's independence during 1971 raised their ugly heads once again during 1975 who played vicious roles at the back of the assassinations of Bangabandhu and his family members including Sheikh Russel. The evil quarters who do not believe in the vigor of 1971 are still around us. We should at all times stand on high alert to safeguard our motherland against all conspiracies.
Classical poets from different countries wrote timeless verses on the beauty of childhood and the sublimity of kids. Rabindranath Tagore, Kazi Nazrul Islam, William Blake, Walt Whitman and many more bards glorified the resplendence of small boys and girls whose giggles, appearances and frolicking have always added heavenly traits to this world.
Sheikh Russel is no more around us but the remembrances he has left behind will keep on boosting our exhilaration to love Bangladesh more profoundly and to consolidate the society with all required privileges for children.
The youths of today should be encouraged to gain more knowledge on Sheikh Russel. While writing about the pathetic death of Sheikh Russel, we should raise our voices to ensure the safety of all children of the world. At present different parts of the world are going through armed conflicts and civil wars. Lots of civilians including children are getting killed. We condemn attacks on all boys and girls. We should work together to build up a world where kids will not fall victims to political vengeance.
Sheikh Russel will remain timeless in our thoughts and remembrances. Death has immortalized all the victims of 15 August 1975 including Sheikh Russel. While concluding, I would like to quote a few words from English philosopher Bertrand Russell, "The world is full of magical things patiently waiting for our wits to grow sharper."
Today is Eid-E-Miladunnabi. Prophet Muhammad (SW) preached the message of peace and brotherhood among believers of all religions. We should promote interreligious fraternity and strengthen our combat against religious fanaticism. We miss Sheikh Russel whenever we speak of innocence and vivacity. May Sheikh Russel's departed soul rest in eternal peace in the world hereafter.
The writer is Chairman, Editorial Board of The Asian Age.